We have been studying on the problem, “What is life?” based on the standpoint of physics. We are trying to grasp the essence of the vital state of life as dissipative system with high nonlinearity. Our contribution onto biological physics is classified into three categories as in the following:

We have clarified the basic property of genomic giant DNA molecules. In the middle of 1990’s, Yoshikawa has published plural number of experimental papers on the conformational transition of giant DNA above the size of 100 kilo base pairs (kbp) (for example, JPC1995; PRL1996; JPC1997). By utilizing the experimental technique of single DNA observation through fluorescence microscopy, it was revealed that single DNA molecules undergo large discrete transition accompanied by the density change of the order of 104-105. We have performed theoretical studies on such large discrete transition of giant DNA molecules and successfully interpreted the fundamental nature of the transition, in terms of the folding transition of semiflexible polymer. It is shown that the contribution of the translational entropy of counter ions play the essential role together with the change of the conformational entropy of the giant DNA chain. Before our study, it had been regarded that the transition of the higher-order structure of polymer chain, coil-globule transition, should be always continuous because of the serious effect of fluctuation on the level of individual polymer chains. Recently, we are actively extending our study on DNA transition into the actual biological systems. Now, it is getting clearer that the discrete transition of DNA has neat concern the mechanism of on/off switching of gene activity (for example; PNAS 2009).

generated through Hopf instability. For example for somitogenesis, periodic generation of the traveling waves directly concerns with the formation of segments. It has been getting clearer that activator coupling between the neighboring cells plays an important role from various experimental observations. Yoshikawa’s group has proposed a theory of pattern formation by using a mathematical model with spatial discreteness, which corresponds to the size of individual cells (for example, science2002; PNAS2006,2007). Under this framework, he has shown that stable spatial patter is generated even through activator coupling. We are now extending this non-Turing theory to various phenomena of spatio-temporal self-organization of living mattes. The basic principle of self-organization of living matters remains as uncultivated state. More than a half-century ago, Turing proposed a mathematical model on the structure formation in living organisms. Our theoretical framework is reaction-diffusion equation under the necessary condition that inhibitor diffuses faster than activator. Our model explains the occurrence of spatial symmetry breaking on a stable fixed point by introducing diffusion term, which implies that this instability is caused at the different parameter area of Hopf instability. Contrary to this restriction, in the actual living multi-cellular systems, macroscopic spatial pattern is generated through the traveling wave which is 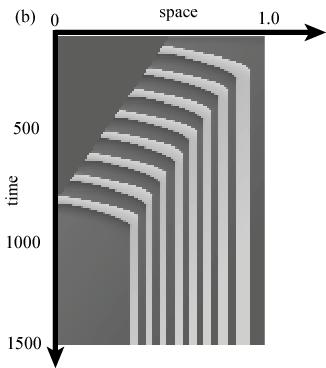 Fig.2 Theoretical spatio -temporal diagram as a model of somitegenesis, as an example of non-Turing model (PRE 2009).

Under the second low of thermodynamic principle, all of the macroscopic regular motion decays spontaneously into microscopic thermal motion of individual small molecules. On the contrary, living organisms generate macroscopic controlled motion by utilizing microscopic molecular motors. In order to solve this long-standing problem, we have been studying the mechanism of the occurrence of macroscopic regular motion driven by chemical nonequilibricity under isothermal conditions. We have successfully reported various experimental demonstrations on the spontaneous generation of various regular motion on the macroscopic level. We have interpreted such experimental results on the model systems by proposing simple nonlinear kinetic equations (for example; PRL2005; Soft Matt.2011). Recently, we are extending such kind of approach to actual biological molecular motors.